He was 11 years old and in sixth grade. It was a painting of Lincoln that first sparked his curiosity in the 16th president and he told the Starkville Daily News about how sitting under that painting in grade school would one day culminate in his gift to Mississippi State University of the largest collection of Lincoln memorabilia and artifacts in existence.

“The face fascinated me, the wear on it, the pressure and the stress and years later I learned the printmaker took the face from a Brady photograph, but he stuck it on the body of John Calhoun, who was the big secessionist of the pre-Civil War who thought the South had a right to leave the Union,” Williams said.

The newest exhibit is part of the $10 million expansion at the Mitchell Memorial Library on the MSU campus and will be available in tandem with the innovative new 21,000-square-foot home of the Ulysses S. Grant Presidential Library on the building’s fourth floor.

While the Lincolniana exhibit features more tangible items from Lincoln’s life and research – including a wooden desk used by Lincoln at a clerk’s office in Petersburg, Illinois – the Grant Presidential Library features interactive exhibits geared toward promoting an interest in the nation’s 18th president.

After becoming enamored with the Lincoln painting in his grade school, Williams first used his lunch money – 25 cents a day – to purchase used paperback books on Lincoln.

His first two buys were “Abraham Lincoln” by Carl Sandburg and a biography of Lincoln by public speaking guru Dale Carnegie.

It was a bust of Lincoln by the famed sculptor Leonard Volk, though, that was the first piece of memorabilia he truly cherished.

“(Volk) sculpted Lincoln’s life mask and a copy of it is here in the gallery and Lincoln’s face and his two hands, and from the face he made a bust and that’s what I wanted,” Williams said. “I was 13 at the time and I still have it in my chambers in Providence.”

Through his years of research, what stood out most to Williams about Lincoln was the personal growth of the man who would see the country through some of its darkest days.

“Lincoln evolved, like we do, into this great leader,” Williams said. “He wasn’t just anointed a leader, and his own self education as an autodidact and the fact that he developed this great empathy for people and political courage because he was a politician before he was a lawyer.”

Williams also commented on Lincoln’s resilience in the fact that he learned to trust his own judgement and he was most alive in the fray.

“General Grant was exactly like that … developing these qualities,” Williams said. “That’s why they got along so well at the end of the Civil War and looking for peace and reconciliation after the war.”

A question Williams often receives is why he chose MSU as the school that would benefit from his contribution of Lincoln artifacts and memorabilia.

“Everybody asks that, but Virginia and I wanted it to go to an institution, college or university in the South that did not have a Lincoln or Civil War collection and the reason for that was many, but primarily to help with the healing of the division and lack of stability in our country because the Civil War didn’t end from the Confederate monument kerfuffle,” Williams said. “It’s still with us its just below the surface.”

Williams recommended visitors seek out a small, but powerful piece of history in the Lincolniana collection that will lend insight into one aspect of the country’s most divisive conflict.

“There is a small, almost a miniature, pamphlet of the Emancipation Proclamation,” Williams said. “It was printed by the government, maybe 200,000 copies, and it’s very rare today.”

The tiny pamphlet is encased in the Linconiana collection, but was first sent into the field with enough copies printed for every Union soldier and sailor.

Williams said the pamphlet was given with the intention of every serviceman knowing the policy of the government was now freedom, not just reunion.

“When they went in the South and slaves ran to them as fugitives, they would be able to say to these slaves as well as understand themselves as a Union soldier and sailor that now emancipation and freedom were really part of the effort to prevail in the war,” Williams said.

Another valuable piece of history included among the scores of priceless artifacts is a signed copy of the Lincoln-Douglas Debates held in 1858.

While Lincoln ultimately lost the race to incumbent Senator Stephen Douglas, the printed copies of the debates have become a rare and popular collector’s item for Lincoln buffs.

Williams referred to the seven debates as “the Granddaddy of all political debates” and compared it to the Kennedy-Nixon debates in 1960.

“The fact he collected all of the debates, both Douglas’ and his own, and then had them published in Cincinnati, Ohio, to give to people and have available for purchase,” Williams said. “It was something like 38,000, which is a big number in that day for volumes to sell.”

A grand opening ceremony is scheduled for Thursday to officially welcome the public to the opening of the Ulysses S. Grant Presidential Library and the Frank and Virginia Williams Collection of Lincolniana, beginning at 2 p.m.

MSU is one of six universities housing a presidential library and is managed by the Ulysses S. Grant Association and MSU under the direction of John F. Marszalek.

The museum features interactive digital exhibits that will help visitors get a better understanding of Grant, along with vivid life-size statues of the 18th president during various phases of his life.

“The likeness of it I think is amazing,” Cunetto said. “We wanted the museum to be very interactive so students could learn more and keep their attention so we developed these interactive exhibits with a company out of Raleigh, North Carolina. We’ve worked with them developing the content for it and they came through and programmed it, so it’s really a learning opportunity.”

Williams said visitors will be intrigued to learn more about a president often overshadowed by his military accomplishments and then explained why Grant should be held in his esteem for his political accomplishments.

“His efforts primarily were to support the civil rights of African-Americans obtained through the war and the Emancipation Proclamation, the 13th Amendment, the final freedom, the 14th Amendment on due process and the 15th Amendment with the right to vote and he really pushed for that with his U.S. attorney,” Williams said. “He broke the Ku Klux Klan, at least the first time and they resurrected after that, so he was a statesman as well as a military leader.” 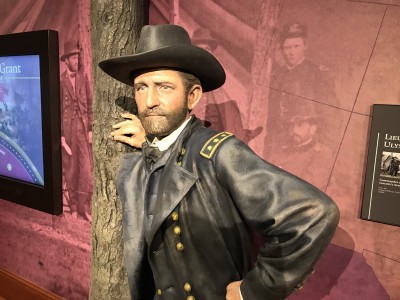 Statue of Ulysses S. Grant leaning against a tree.