Grant library notching a place for itself on Civil War trail

The irony of a library dedicated to U.S. Grant in Mississippi did not pass unnoticed.

A space of 21,000 square feet was created at Mississippi State University at a taxpayer cost of $10 million to tell the story of the Union general who captured Vicksburg, a turning point in the Civil War, and won the ultimate victory over the Confederacy at Appamattox Courthouse, Va.

For a state whose flag still includes the Confederate Battle Flag, some see irony in the selection of the Mitchell Memorial Library as host building for the Grant Presidential Library.

Not only that, but Mitchell Library also includes the Frank J. and Virginia Williams Collection of Lincolniana, which has been valued at $3 million. President Abraham Lincoln was, of course, Grant’s commander in chief.

Howeve, aside from being the repository of invaluable historic documents and artifacts, a major source of scholarly research, the Grant Library and Lincoln collection, is attracting tourists.

Since the library opened on Nov. 30, 2017, it has registered 8,000 visits, according to John F. Marszalek, executive diector of the library and professor emeritus of history at MSU.

And that includes overcoming the attendance obstacle of extended breaks during the Christmas holidays and spring break, when the school shuts down and so must the library, Marszalek said in an interview.

Visitors from 48 of the 50 states along with a number of foreign countries have taken in the library, he said.

“We’re doing very well,” he said. “We’re not the easiest place to get to.”

“What we encourage people to do is start at Shiloh and Corinth and come to us and [then] to Vicksburg,” Marszalek said.

Once the scholarship of Marszalek regarding Grant and his right-hand commander, William T. Sherman, is understood, then the selection of Mississippi State is not quite so unexpected, so ironic.

Marszalek is also the author of “Sherman: A Soldier’s Passion for Order,” published in 1993. The next year, he was named Giles Distinguished Professor at MSU, a position he still holds in an emeritus status.

The Publisher’s Weekly called it “an outstanding modern study of one of this country’s great public figures.”

Marszalek said that he is pleased with the reception of “The Complete Personal Memoirs of Ulysses S. Grant, Annotated Edition,” for which he edited and has received critical acclaim.

It was published last year by Harvard University Press as a timely event that paired with the library opening.

Grant biographer Ron Chernow said that “this fine volume leaps straight onto the roster of essential reading for anyone even vaguely interested in Grant and the Civil War.”

A native of Buffalo, N.Y., Marszalek taught at Canisius College in Buffalo and Gannon University in Erie, Pa.

One of Marszalek’s speaking engagements was the annual Mississippi Book Festival in Jackson on Aug. 18. The panel was moderated by Williams, who, with his wife, Virginia, donated their Lincoln collection to MSU.

Williams, former Chief Justice of the Rhode Island Supreme Court is author of “Judging Lincoln” and “Lincoln as Hero.”

These two men with legitimate “Yankee” credentials are making inroads in the Deep South and winning over skeptics. 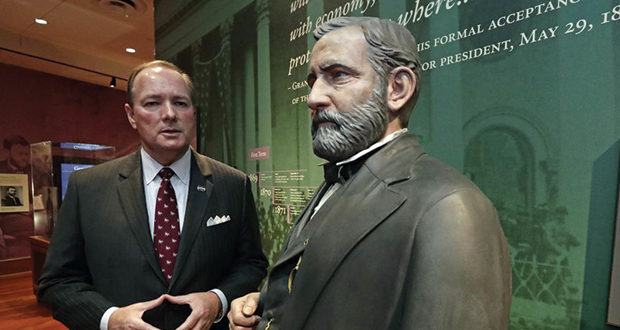